On a day like today, 30 years ago, Avilés de Taramancos died (Boa, Noia, April 6, 1935, A Coruña, March 23, 1992). Precocious poet (he published his first poem at the age of fifteen, in the magazine Tapal de Noia), emigrant and adventurer (he spent time in the Amazon jungle), he became a tavern poet when he returned to Galicia in the eighties. A return full of cultural initiatives (poetic recitals in his Tasca Típica tavern, cultural societies such as Catavento, chairing the Association of Writers in the Galician Language, etc.) in which he still had time to deal with cultural policy as councilor for culture in Noia for a few years before he died and, above all, write and publish constantly.

Nature, love, eroticism and a deep knowledge of life and men, make up the substance of a writing that begins in Galician because, as he himself has said, he did not know the names of the birds, the trees or the things in a language other than their own. When he already learned other languages, Avilés was able to integrate them into Galician, as in this beautiful poem published in “Cantos caucanos”.

“Dásme a vida”, taken from the collection of poems “As torres no ar” published in 1989, masterfully mixes a touch of furtive eroticism with the despair derived from an adulterous relationship. He already wanted to sing a love song, and Avilés presents us with this beautiful, furtive and fugitive yearning.

To pay tribute to the bartender poet, I leave here the version of “Dásme a vida” that we performed as a trio Alberto Romero on electric guitar, Fernando Román on soprano sax and me on acoustic guitar. The recording of the image was made by Carlos Amil, and Miguel Otero was at the sound table. It belongs to a concert we did at the Valdoviño Municipal Auditorium on March 11 of this year. Enjoy it. 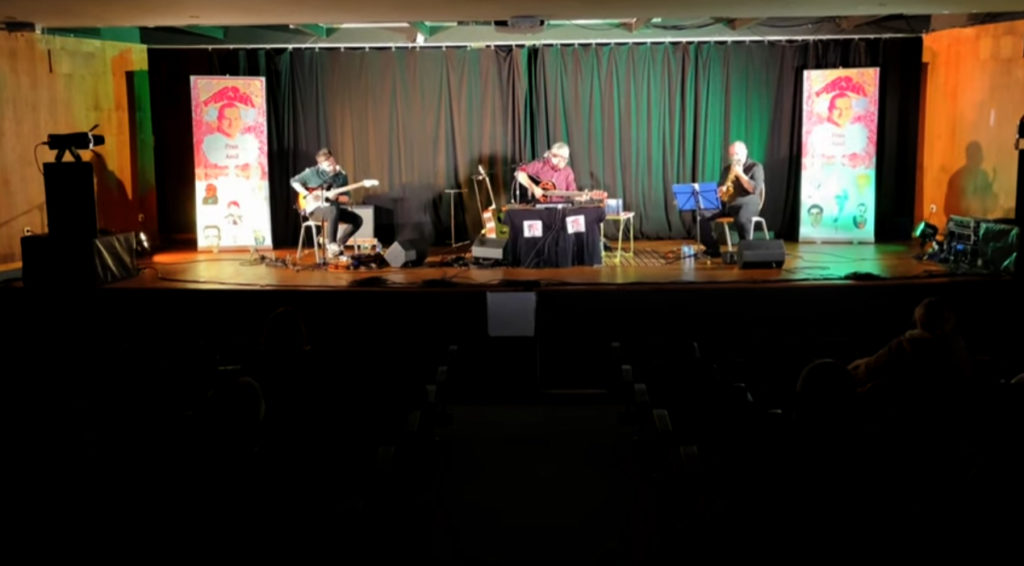 If you want to know more about the tavern poet, you can visit these pages:

In Galicia Única, in Spanish.

On the page of the Real Academia Galega.

In the blog «Brújulas y espirales», by Francisco Martínez Bouzas, in Spanish.