He developed an economic policy, with which he reformed the currency and the treasury. He also carried out a literary, scientific, historical and legal work done by his royal desk. Alfonso X sponsored, supervised and, many times, participated with his own writing and in collaboration with a group of Latin, Hebrew and Islamic intellectuals known as the School of Translators of Toledo, in the composition of an enormous literary work that largely began the prose in Spanish.

“Las Siete Partidas” stand out, a legal compilation and principles of law, and some treatises on chess and astronomy. He also wrote poetry in Galician-Portuguese, such as the “Cantigas de Santa María”, making a great approach to the cultured language of the time at the court of the kingdom, the Galician-Portuguese language. He also wrote troubadour poems. For all this he was called The Wise.

As Xosé Filgueira Valverde tells us in his book “Afonso X e Galicia, e unha escolma de cantigas” published by the Real Academia Galega in 1980: “Approaching the figure and facts of Alfonso X is finding one of the most hurtful paradoxes of the historical life of Galicia, where so many have been given. He was, without a doubt, the greatest “classic” of our language. His role in medieval Galician letters can be compared to that of Dante in those of Tuscany; It is not easy to find a pair of personal and court works in the other literatures of Romania. And yet, the man who fixed and raised the literary language so high, he was an alien king when he did not adverse to our Earth…”

Valverde goes on to say that the Wise King had Garci Fernández, lord of Villardemiro and Celada, and his wife Doña Maior Arias as tutors. Both were of Galician descent and had a palace and land in the Ourense region of Maceda, where Marcelo Macías supposes that Afonso spent part of his childhood, in Manzaneda de Limia, Allariz and other places that belonged to them, and that he learned Galician here. Carlos and I went to Maceda to make this intervention in the castle, with the origin dating back to the 11th century, today converted into a hotel restaurant. A curious feature of this castle is that it is considered to be the fortress with the thickest interior walls in Europe.

Regarding the authorship of the “Cantigas de Santa María”, a set of four hundred and twenty-seven compositions in Galician-Portuguese, it should be said that experts attribute a good part of these compositions to troubadours such as Airas Nunes, but there is consensus that some of them are directly attributable to the monarch. This would operate in the whole of the work in the manner of an architect, directing all the work. There are also those who say that all the work is the direct responsibility of the king.

We chose this “Rosa das rosas”, the song number ten and the first in praise of the Virgin, because it is one of the best known and versioned songs. It is one of the songs that are attributed to Alfonso X The Wise in authorship. Almost all the interpretations emerge from the original score, in a medieval musical style. But we wanted to make an approach to current affairs, and we gave it an air of rap and Latin music, in which we had the incredible trumpet of Manu Payno, the Cuban guitar called “tres” played by the Cuban Francisco Rosa, Paco Cerdeira on electric guitar, Antón Torroncho on bass, Arturo Vaquero on percussion, and the enormous Carmen Rey and Ángeles Dorrio on choirs, leaving me with the main voice, drums and some different percussion of Vaquero.

If you want to go deeper into the study and symbology of this song, you can look at this page dedicated to early music.

To celebrate this anniversary, I met again with Richi Casás and Fernando Román, at Casa Lourán, in As Restrebas in the Xestoso Valley (Monfero, A Coruña) where Anabel González lovingly left us a space to collect our tribute. We chose an acoustic version of “Rosa das rosas”, I playing the rhythm guitar, Richi the alto sax, and Fernando the trumpet. Enjoy it. 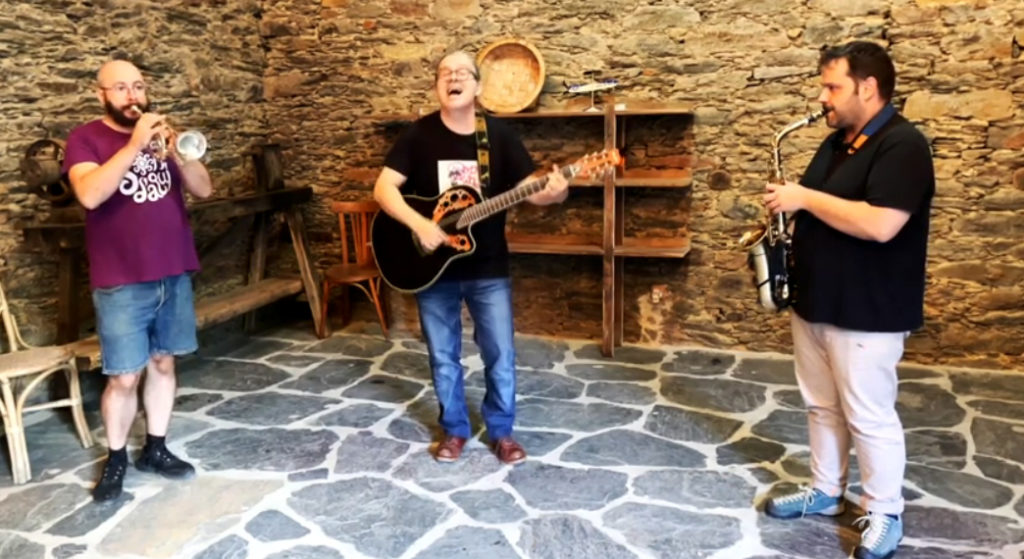 You can also consult the work of Antoni Rossell “AX-G. Afonso X e Galicia” (2021), publication of the Galician Culture Council.

If you enter this page in English you will find many facsimiles, studies, glossaries and all kinds of wonders to get lost for hours on a trip to the past. Dare!!

You can also consult “The Alfonsí history: the model and its destinies (13th-15th centuries)”, studies collected and introduced by Georges Martin. It takes a while to load, but it’s worth it.

And for the most daring and completists, on this page, also in English, you will find a very complete database on the recordings of the cantigas. So you see, you can do a quick tour or a delayed one. It’s your choice, folks.