In Pereira, Rairiz de Veiga (Ourense) the poet Antón Tovar was born one hundred years ago. On October 26, 1921, he had his first contact with a world that he would miss, and that would show him the existential face to immerse himself in the search for answers (rather with the mission of asking questions that he knew were difficult to answer, or directly with no answer possible).

Literary creator in a dark time for the word in our language, Antón Tovar also knew how to function in Spanish. He belonging to what would be called Link Promotion, which is none other than the one that links the Xeración del 36 with the Xeración das Festas Minervais. To the latter belong some of the authors who enrich my albums belong to the latter: Avilés de Taramancos or Manuel María.

Let Antón Tovar himself speak, through his work “Intimate Diary of an Old Man Revolted”, published by the Galaxia publishing house, when he writes: “June 28, 1995. Intimate diary dun vello revoltado. I am many years old, I do not say how many, and I am full of ailments, rather illnesses, some vile, typical only of old age, another distant, that comes from afar, of youth; Regarding this, I am not convalescing, which is to be well and not to be. Yes, Diary of an old man. But I don’t feel old and less, of course, old. Am. The title of my diary is a poetic license. (I reread and I have seen that I was wrong. The thing is serious).

“My hand trembles with which I hit the pen. I do not know why. It is a small ordeal. Félix Vergara Vilariño knows a lot about this type of torture, our great, traditional and clear poet, forgotten by interested rabble.

“The dead do not exist, they cease to exist when death invades them, a process that they cannot be aware of and of which Epicurus knew a lot. There are the disappeared whose memory we who live suffer. Only fools who say they believe in immortality can dare, led by the hands of priests, to speak, to chatter about immortal souls.

“San Martiño” combines joy and irony, the desire to live humanly even in the saints, and I was inspired by this piece with a funky and even jazzy aroma, which I was able to carry forward because I am fortunate to work with some of the most great of this country, and even of any country. Manuel Payno on trumpet, Ricardo “Richi” Casás on tenor sax, Antón Torroncho on bass, Paco Cerdeira sparkling on electric guitar and Fernando Román on bagpipes take the song to starry and passionate levels. Add the privileged gorges of Carmen Rey and Ángeles Dorrio, and everything boils towards the stratosphere. I was just passing by and they messed me up.

*The magosto is a festive and popular celebration, traditional throughout Galicia, organized around the collection of chestnuts. It is also used to taste the first new wine. It was traditionally held on November 1, All Saints’ Day, although in the province of Ourense, because the chestnuts ripened later, it was delayed until the 11th, San Martiño. Nowadays it is celebrated on any date between the second fortnight of October and the first of November, becoming the quintessential autumn festival.

To celebrate the centenary of his birth, we approach the fabulous Ínsua dos Poetas, that extraordinary space that Luís González Tosar is building on what was his father’s estate (today public property in a generous move by Luís González Tosar) in Esgueva, Madarnás, five kilometers from O Carballiño (Ourense). Here, in this Ínsua dos Poetas that welcomes great voices of the Galician language, the Antón Tovar space welcomed us and gave us strength to interpret an acoustic version of “San Martiño”. 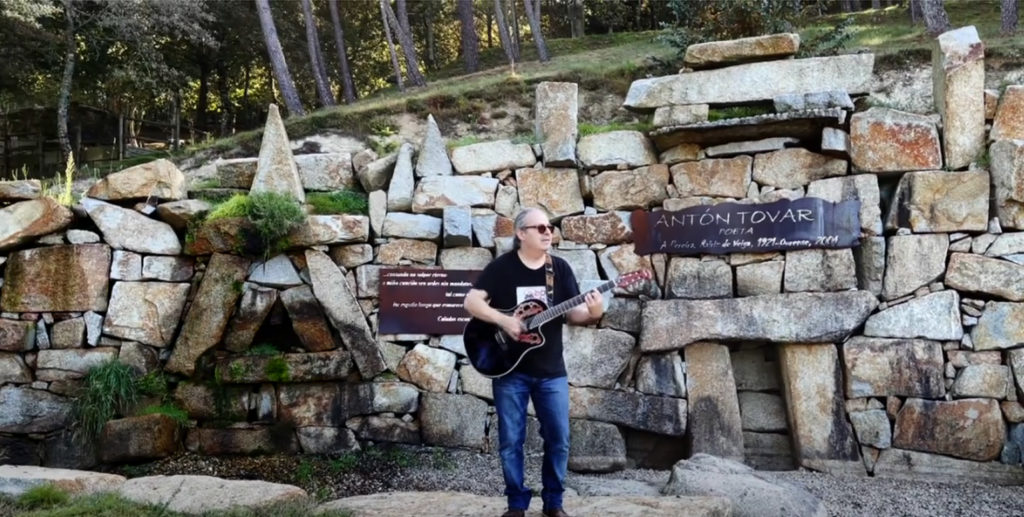