It is the 18th anniversary of the death of Antón Tovar, one of the most outstanding lyrical voices of Galician poetry of the 20th century. Born in Pereira, Rairiz de Veiga (Ourense), on October 26, 1921, he chose June 16, 2004 to end his time in this life. He chose the city of Ourense as the final destination of his trip, perhaps because he spent most of his life in this city. On this page of the Council of Culture of Galicia they make an interesting profile about our poet.

This is how Antón Tovar recognizes the influences on his poetry: “Rosalía, Curros, Rubén, Antonio Machado, Baudelaire, Francis Jammes, Blas de Otero, Teixeira de Pascoaes, Pessoa, Antero de Quental, Torga, and, above all, Antón Tovar, are the authors that influence the work of Antón Tovar.” (Taken from page 36 of the book “Intimate Diary of an old rebel”).

And he continues in the same book, in the following paragraph on the same page: “It mainly influences the pain and joy experienced by a person as important as Antón Tovar. So important, so important, that it does not exist. And yet, when I suffer, when I enjoy, it seems that I suffer and enjoy. Mystery.”

Antón Tovar wrote this mention of San Martiño in his work “Diario intimo dun vello revoltado”, published by the Galaxia publishing house: “Montealegre can be seen from the room where I write. It is a wild mountain of pines and rocks. Beneath the mountain is the old cemetery. In Montealegre we used to go as children and young men to San Martiño to do the magosto. Now the time of the magostos has passed. A cross stands on a rock in Montealegre. An enigmatic dead person always rests on the rock.”

The poem “San Martiño” appeared in the book “Arredores”, published in 1962 in the Salnés Collection of Editorial Galaxia. It caught our attention that a poet so deeply concerned and anguished by the human condition should think of combining irony with the desire to live humanely (I would almost dare to say it so Galician) to the saint. This game inspired me this funky flavored piece, in which I was lucky enough to work with some of the best musicians in this country. Manuel Payno on trumpet, Ricardo “Richi” Casás on tenor sax, Antón Torroncho on bass, Paco Cerdeira sparkling on electric guitar and Fernando Román on bagpipes take the song to starry and passionate levels. Add the privileged gorges of Carmen Rey and Ángeles Dorrio, and everything boils towards the stratosphere. I was just passing by and they tangled me up.

To pay tribute to Antón Tovar, I leave you here the version of “San Martiño” that we performed as a trio Alberto Romero on electric guitar, Fernando Román on soprano sax and I on electric drums. The recording of the image was made by Carlos Amil, and Miguel Otero was at the sound table. It belongs to a concert we did at the Valdoviño Municipal Auditorium on March 11, 2022. Enjoy it. 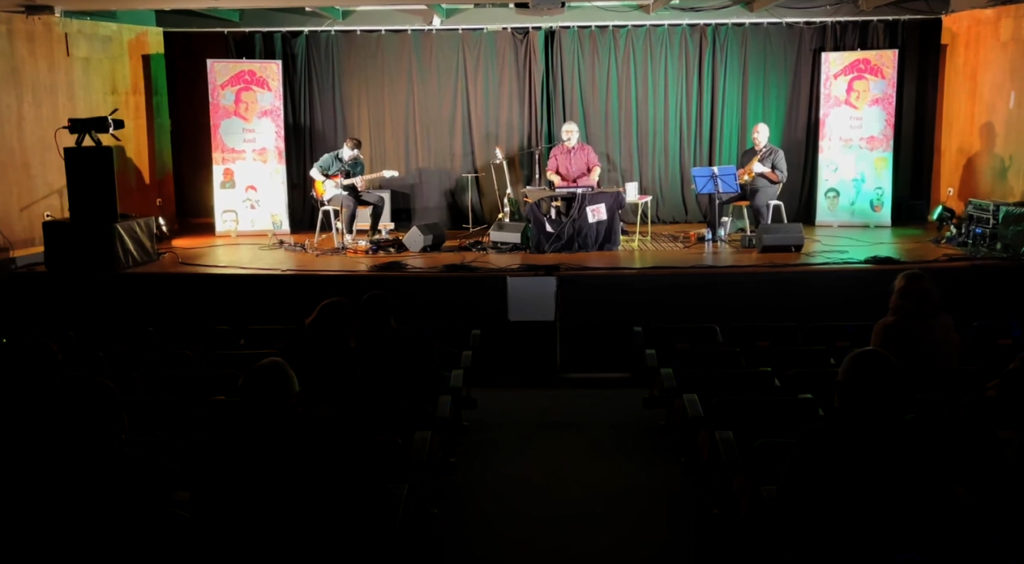